The strong scientific case for THz radiation is illustrated by many applications in various fields such as solid state physics, biology and nanotechnology. The THz region lies above the frequencies of traditional electronics, but below the range of optical and infrared sources. Up to now, possibilities to generate sufficiently intense and brilliant radiation of the wavelengths in question were scarce and the region was therefore named the “THz gap”.

In accelerators such highly intense coherent THz radiation can be generated under special conditions when the electron bunch length is comparable to the wavelength of the emitted radiation. In the 110-m storage ring, the Karlsruhe Research Accelerator (KARA) at KIT Campus North, these conditions are provided by a dedicated magnet optics for short-bunch operation with beam energies between 0.8 and 1.8 GeV. 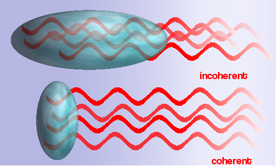 The generation of THz radiation continues the tradition in the field of accelerator physics in Karlsruhe which goes back to Heinrich Hertz's first observation of electromagnetic waves and Rolf Wideroe's idea of a "Ray Transformer" (later on known as "Betatron"). In May 2007, the Helmholtz-University Young Investigators Group for the study of coherent THz radiation from ultra-short bunches in electron storage rings was established at the Forschungszentrum Karlsruhe and Universität Karslruhe (TH) by A.-S. Müller. Research activities of LAS members in accelerator physics and technologies are pursued at Campus South and in part with close collaboration with the Institute for Beam Physics and Technology (IBPT) at Campus North, which was founded in 2016.